I arranged this traditional Appalachian spiritual for the Guilford (VT) Community Church UCC Choir in 2006.

I met Mary Alice at the weekly Tuesday evening contra dance held at the YWCA in Cambridge Massachusetts’ Central Square in September 1975.  I had been a viola da gambist, studying with the Boston early music group Quadrivium Collegium when I was introduced to the rich Cambridge folk music and dance scene just the year before in 1974 and I was hooked.

I invited Mary Alice to go to the Greater Boston Folk Music Getaway in New Hampshire.  On the opening evening we were having a sing-around; everyone was in a circle, taking turns leading songs.  When it was Mary Alice’s turn, she shyly turned to the sweet gent beside her and said “do you know ‘Bright Morning Stars’?” and he said, yes, he did know it, so she led it with the group.  She found out 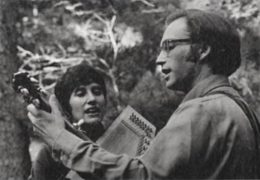 later that she had asked Tony Saletan, who was so closely associated with the song that some folks thought (mistakenly) that he had written it. The other singer in that Saletan Youtube is Tony’s wife Irene Saletan né Kossoy, one half of the then legendary Kossoy Sisters. By the way, I heard that when Irene (Kossoy) Saletan heard “I’ll Fly Away” while watching “O Brother Where Art Thou” she said “Hey, that’s my sister and me!” The song had been put into the movie without the producers knowing the source, but that was soon rectified. 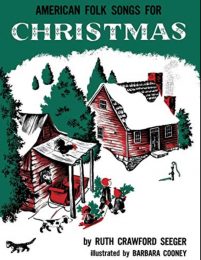 Crawford Seeger included it in her 1953 “American Folk Songs for Christmas”.  In the late 1920’s Ruth Crawford, one of the few American woman composers of modernist music, was studying composition with American composer Charles Seeger, and they married in 1931. In 1936 Charles Seeger was appointed to the music division of the Resettlement Administration. There Ruth Crawford Seeger worked closely with John and Alan Lomax at the Archive of American Folk Song at the Library of Congress to preserve and teach American folk music. (The last sentence was lifted verbatim from Wikipedia.) You can hear Ruth Crawford Seeger’s compositional sense in her creative piano accompaniment on this 1957 recording of “Bright Morning Stars” with one of her daughters singing (I’m guessing Peggy Seeger).

Our son Stefan Amidon is in the singing group “The Starry Mountain Singers“, all alumni of Larry 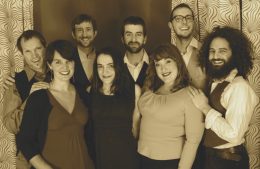 Gordon’s Northern Harmony choir.  I have hired them to record many of my choral arrangements; I call them the “Blind Faith” of traditional a cappella singers – a really extraordinary group of singers.  It was a no brainer to ask Suzannah Park to sing the solo on my arrangement of “Bright Morning Star”;  she is a third-generation traditional singer. Suzannah’s Grandparents, Chicago-based George and Gerry Armstrong were central in the American folk music scene of the 1950’s and 60’s. George and Gerry’s daughter,

gifted singer/storyteller Jennifer Armstrong married the polymath dance caller/storyteller Fred Park and they birthed Georgia Rose and Suzannah.  (Full disclosure; Suzannah and our son Sam Amidon were a couple all through high school.) That is Suzannah you hear singing the opening solo in the recording of my arrangement of “

There are a lot of wonderful performances and harmonizations of ‘Bright Morning Stars” out there, but I will leave you with this performance by the great Ralph Stanley and his Clinch Mountain Boys.

They are down in the valley praying…

Oh where are our dear fathers…

They have gone to heaven shouting…